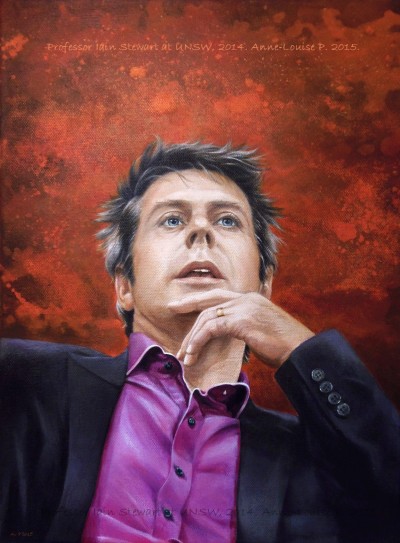 Professor Iain Stewart of Plymouth University lectures at UNSW, Sydney, July 2014 – Acrylic paints on canvas. It’s an unusual angle for a portrait but it’s an audience member’s view of him. I took a quite a lot of photos during the evening, mostly without a flash, so many turned out very yellow/orange due to the plywood backdrop, as you will see from the photos at the bottom of this page. The painting is an amalgam of two photos taken during question-time after Professor Stewart’s Scientia Award lecture. I wanted to try to paint his hand as well – for the challenge. I enjoy painting shiny things, so I was able to incorporate his wedding ring and his sleeve buttons in this painting too. I have made his hand a fraction too small as I didn’t want it overwhelm his face in this composition.

Photos of the painting from pencil sketch to finished picture. 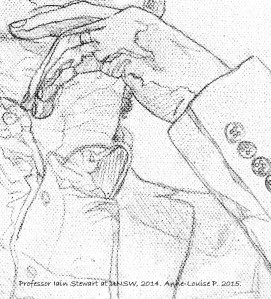 I’ve shown only a cropped version because nobody looks good at this stage of any painting. I try not to make it into a proper drawing by roughly sketching the lines where the deeper shadows will go. 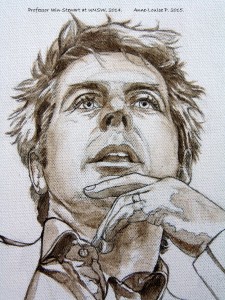 I like to do an under-painting in a light brown acrylic to preserve my pencil lines and stop the graphite from muddying anything that’s meant to be pale in colour.

Sideways pic to show the approximate size of the canvas – 30cm x 40cm. 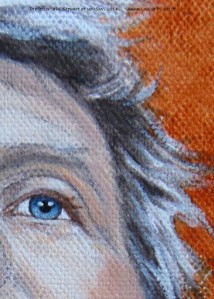 Adding the first layers of colour. 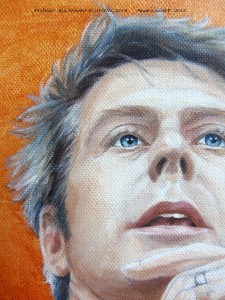 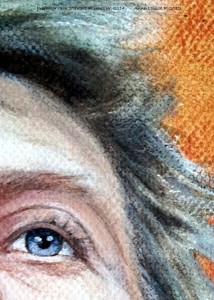 More work on the eyes. 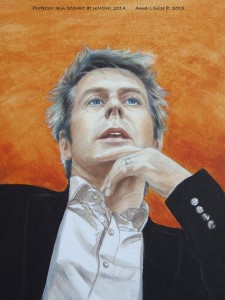 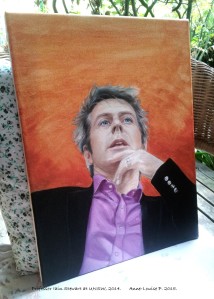 First layer of colour on the shirt. It appears to have a little bit of a sheen to it, which is nice to paint in a fabric. 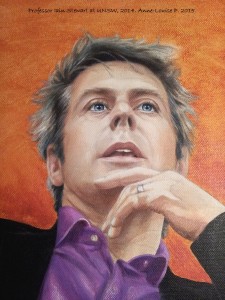 More paint layers on the shirt; more work on the shadows on his skin. 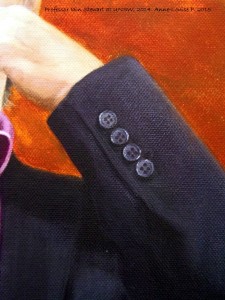 Close-up of the buttons. It took a whole episode of Foyle’s War to paint just these four. 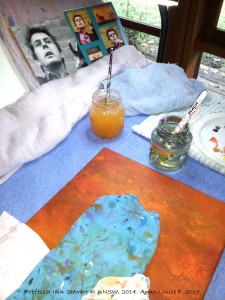 A lot of time was spent painting and repainting the background. (About three episodes of Foyle’s War, Led Zeppelin Live at the O2 x 2, and all of Rise of the Continents.) 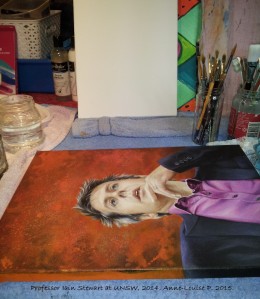 I wanted it to represent a lava flow, but not make it so bright that it took over the subject. I did this by painting watered-down brown acrylic paint over the orange, waiting a while, then spattering clean water over it with a toothbrush, and finally, blotting the water off carefully with paper towel. 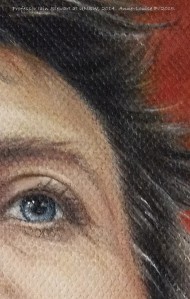 A very small, pointed brush with indigo paint was used to lessen the size of the white reflections in the eyes, and then to put in some eyelash shadows and reflections in almost-black. You can see where I have had to repaint around the eyes many times to try to get them looking right – the canvas grain is no longer visible! 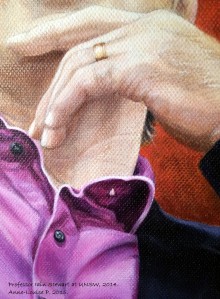 Close-ups: Shirt collar – On the canvas it appears almost 3D, as if you could insert a paint brush into the folded-over bit. Ring – The details of his wedding ring are difficult to see in my photos, so I just painted something golden and ring-shaped. 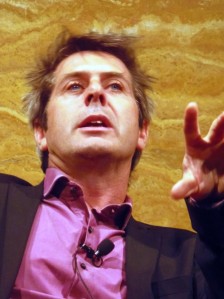 I used his face from this photo – he was perhaps coming out of a blink here, so I made his eyes a bit more open. His hand was only half in it. I can’t really extrapolate; I have to be looking at something while I’m painting it… 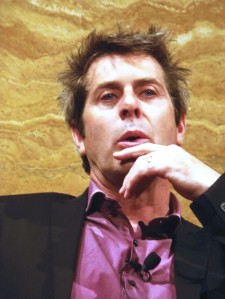 …so I did the hand from this photo.

My attempt at painting a picture of an opal. Acrylic paints on 13 x 18 cm watercolour paper.